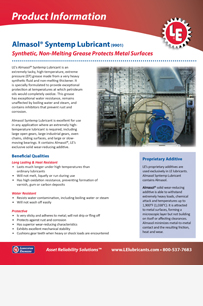 Lubrication Engineers, Inc., LE's formulated ALMASOL® Syntemp Lubricant is a high temperature extreme pressure (EP) lubricant made from a very heavy synthetic fluid and non-melting base. It is specially formulated to provide exceptional protection at temperatures at which petroleum oils would completely oxidize (or carbonize).

The evaluation was performed to confirm that the ILC pump was capable of pumping an extremely heavy NLGI # 2 grease with a uncommonly thick base oil viscosity of 42,700 SUS @ 100F ( 7,630 cSt@40C) and that the lubricant would flow through a Bijur M2500 series progressive divider valve. The “desmodromic” pumping element in the ILC pump has no return spring in that it is mechanically coupled with the rotating cam in the pump. These components coupled with a controller, cycle switch and fault notification will be used to lubricate 4 bearings that are operated at a continuous 350F and very low rotational speed, hence the need for a lubricant which such a heavy base oil viscosity. 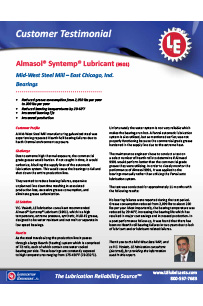 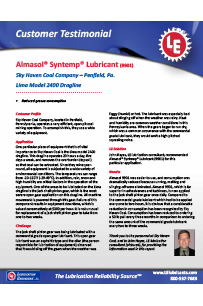 Almasol is LE's exclusive wear-reducing additive which has an affinity for metal similar to polar attraction. It attaches itself to working surfaces in a single microscopic layer, yet it will not build on itself tremendous load-carrying capacity, is impervious to acid attack and minimizes metal-to-metal contact and the resulting friction and wear. When added to LE lubricants, it gives an extra dimension of protection available in no other lubricant.